Nikko, an area rich in nature, culture and history, is only two hours away from Tokyo and close to many of Japan's other prime travel destinations. Limited express trains depart for Nikko from two major stations in Tokyo: Shinjuku and Asakusa. The journey from either station takes about two hours. A journey on rapid and local trains from Asakusa adds about 30 minutes but the fare is about half that of the limited express. Opt for a Tobu travel pass to save money on the round-trip journey. An alternative is taking the shinkansen from Tokyo or Ueno stations to Utsunomiya, then changing to the JR Nikko Line. This routing is more expensive and requires a transfer, but is fully covered by the Japan Rail Pass. Highway buses to Nikko depart from Narita Airport, Haneda Airport, and Yokohama. 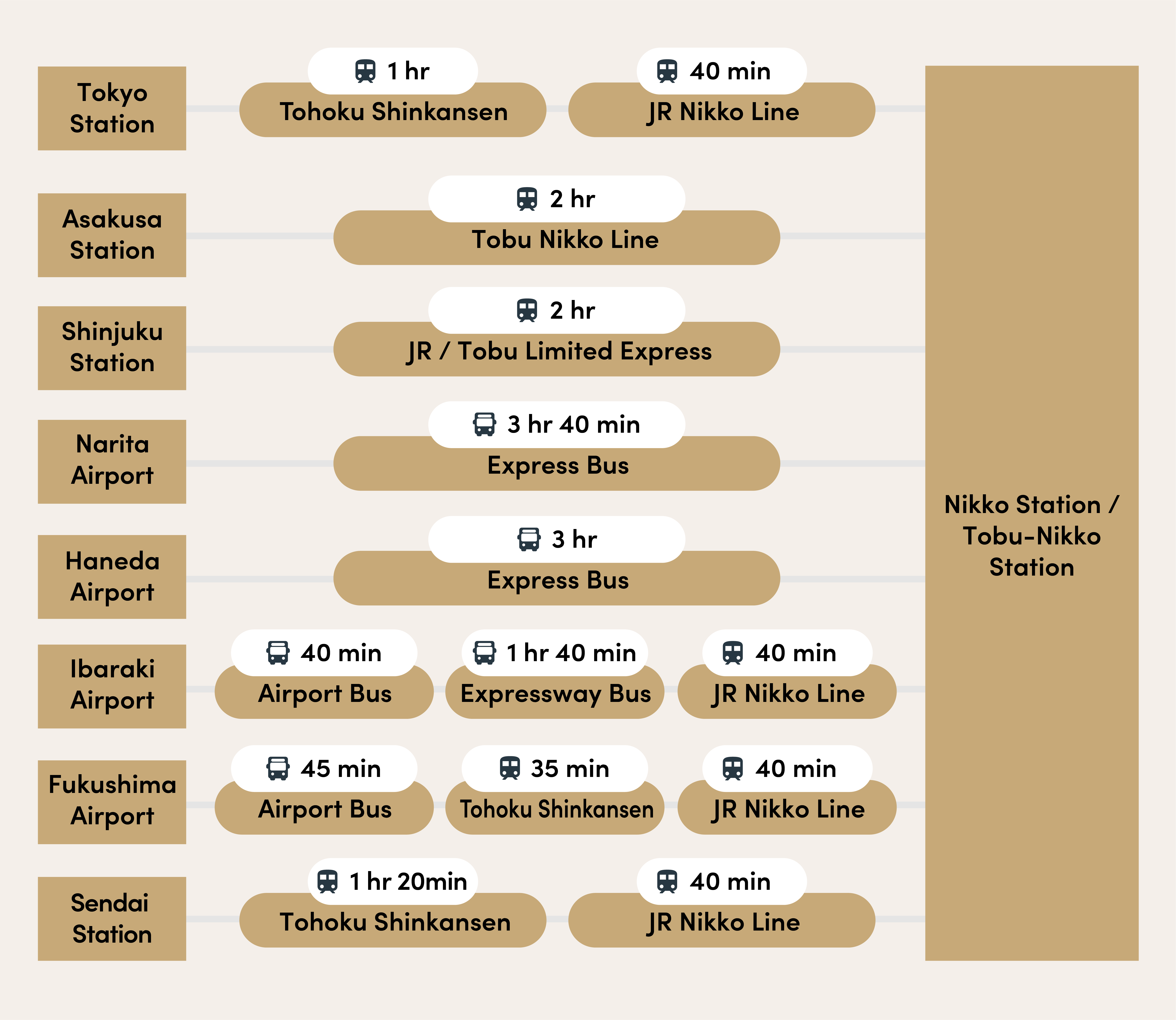 Buses are the most popular way of getting around Nikko. Buses here aren’t like traffic-bound urban buses; they weave along the scenic, rural roads with ease.

Regular buses run frequently between the city's train stations and major tourist sites as often as every 15 minutes. Buses traveling further afield do not run as frequently, but it’s easy to avoid waiting around with a little bit of planning.

Tobu runs the bus network in Nikko, and offers a variety of routes. One recommended route is the World Heritage Sightseeing Bus, which runs in a loop around some of Nikko’s beautiful shrines and temples. These buses run frequently from Nikko and Tobu-Nikko stations, and offer a convenient way to see multiple sights in a short time. In the Kinugawa area, buses link Kinugawa-Onsen Station and the surrounding hot spring resorts with theme parks and Yunishigawa Onsen. Some buses cover larger areas, including routes that connect Nikko and Okunikko with Kinugawa Onsen.

Tobu offers affordable travel passes which allow unlimited use of their buses, available for purchase at the Tobu-Nikko Tourist Center and the Nikko Station ticket office.

Taking the bus is easy. Stops are numbered, so you don’t need to worry about reading Japanese — just hit the “stop” button when your stop is up next. Fares depend on distance traveled.

Trains are the best way to get to Nikko from most places, but they are not ideal for getting around the region’s mountainous terrain. However, there are a few destinations to which trains offer the best route.

The neighboring onsen towns of Kinugawa and Kawaji attract visitors from all over Japan and across the world. It is an easy journey of 35 to 45 minutes by train from Tobu-Nikko Station. The area offers hikes and beautiful natural vistas, the marvels of Tobu World Square and Edo Wonderland, open-air hot spring baths and a wide variety of accommodation. The train makes it easy to relax in Kinugawa Onsen during the day, and be back to central Nikko or even Tokyo by evening.

Similarly, the charming, historic town of Imaichi is just a 10-minute train journey away. Enjoy the town’s well-preserved traditional crafts by learning to make your own soba noodles, and sample freshly-brewed sake on the sake brewery tour.

Renting a car is a great way of exploring Nikko at your own pace. Driving offers the freedom to leave the tourist trail and discover the region’s best-kept secrets: distant ryokan, pristine onsen and hidden waterfalls.

Renting a car from one of the nationwide chains is straightforward. Major train stations — Nikko, Tobu-Nikko, Kinugawa Onsen and Shimo-Imaichi — are all close to rental car locations. Tourists from most countries only need an International Driving Permit and their driver’s license, but be sure to check the requirements before traveling. Beside that, it’s as simple as booking online and picking up your vehicle before you start your adventure.

The mountain roads are considerately designed, with frequent signage in both English and Japanese, clear markings, and extra roadway for taking tight corners. Gas stations are reasonably frequent, but it’s worth planning ahead if you’re going anywhere especially remote. Traffic is uncommon, and plenty of parking is available.

Driving makes moving between the major sites easy, and provides the ability to visit areas that are otherwise hard to reach. Remote destinations, such as Urami Falls, are visited only by infrequent buses but offer serene natural beauty to those willing to make the drive.

Nikko’s taxis offer the freedom of driving without the hassle.

Standard taxis are plentiful outside of the area's more major train stations. Outside of major areas, it can be hard to find taxis to hail on the street. However, it’s easy to summon a taxi to pick you up wherever you are, using their telephone dispatch service or the handy Japan Taxi app.

Taxi drivers may only speak limited English, but will certainly be familiar with the names of major attractions. If you’re going somewhere more specific, or to your accommodation, it’s useful to have the address written in Japanese. Most taxi drivers also have a translation service on speed dial, so there’s no reason to fear the language barrier.

Sightseeing taxis are a great way to travel between the region’s attractions in comfort, with the maximum flexibility of accompanying you as you visit multiple destinations and taking you straight to each destination.

Be sure to look at the example routes and estimated costs, available online, before choosing your own route and booking in advance using the phone service. 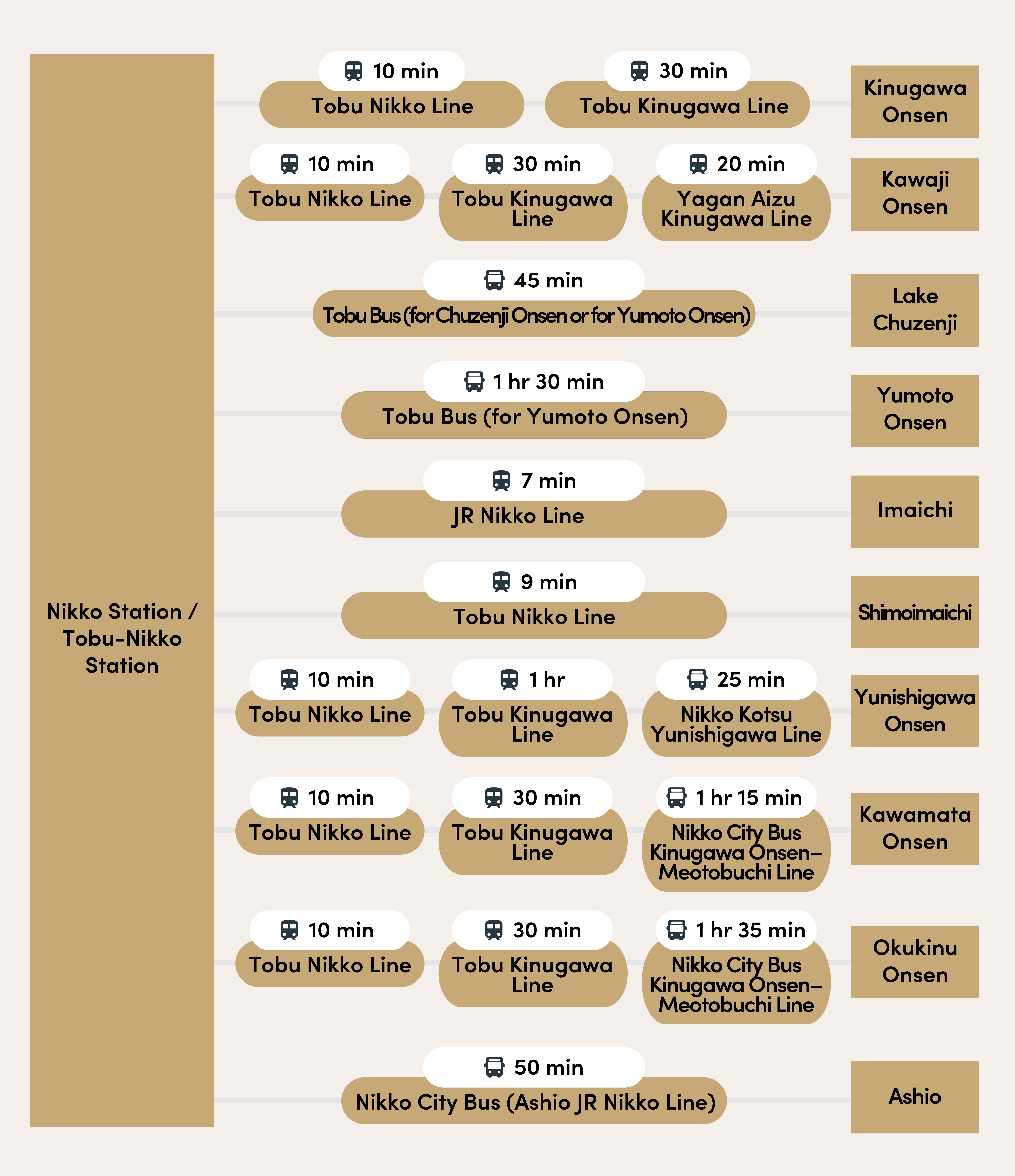 Travel passes, available exclusively to international visitors, make it cheaper and easier to get around Nikko. Instead of having to purchase individual tickets for each mode of transportation, these fixed-price passes provide unlimited use of trains and buses. They also provide discounts at some popular stores and restaurants. If you’re planning a stay in Nikko, these passes can make travel smoother and save you money. Keep in mind that most cannot be purchased in Nikko — and are easier to buy abroad — so make sure to do your research before coming to Japan.

Two companies offer travel passes which work in Nikko. JR offers the nationwide Japan Rail Pass, and JR East sells a number of passes covering a smaller area. These passes include unlimited travel on the JR network, which is useful for getting to Nikko, but they are not very practical for getting around the area.

Tobu, another company, sells passes that are more useful for Nikko-specific travel. The World Heritage Area Pass covers the Tobu train journey from Tokyo to Nikko and provides free use of the buses within the core sightseeing area. It is valid for two days. The All Area Pass also includes the train from Tokyo and buses within the World Heritage Area, and adds unlimited travel on Tobu buses and trains throughout the rest of Nikko. This pass is valid for four days and is recommended for those who want to get off the beaten track and explore the less-seen, rural side of Nikko.

Unlimited travel on all JR East trains in the Kanto region—including shinkansen—and the Tokyo Monorail for three consecutive days.

Unlimited travel on all JR East trains—including shinkansen and limited express trains—in Kanto and Tohoku. This pass is recommended for those traveling around Tokyo and Nikko, and then on towards Tohoku.

Use valid for any five days during the 14-day period starting on the date of issuance.

Unlimited travel on all JR East trains—including shinkansen and limited express trains—in Kanto, Niigata and Nagano. This pass is recommended for those traveling around Tokyo and Nikko, and then on towards Nagano and Niigata.

Use valid for any five days during the 14-day period starting on the date of issuance.

One round-trip to Nikko from Tokyo, plus unlimited travel around the Nikko area, including World Heritage shrines and temples, Lake Chuzenji and the Okunikko area, and Kinugawa Onsen.

Recommended for those who want to explore World Heritage shrines and temples, as well as relax at Kinugawa Onsen. One round-trip train journey from Tokyo included.