The city of Nikko has various hot springs (onsen), each with a different atmosphere and effect. Depending on the qualities of the spring, each onsen has a distinct color, smell and feeling, but all will refresh your body and spirit. 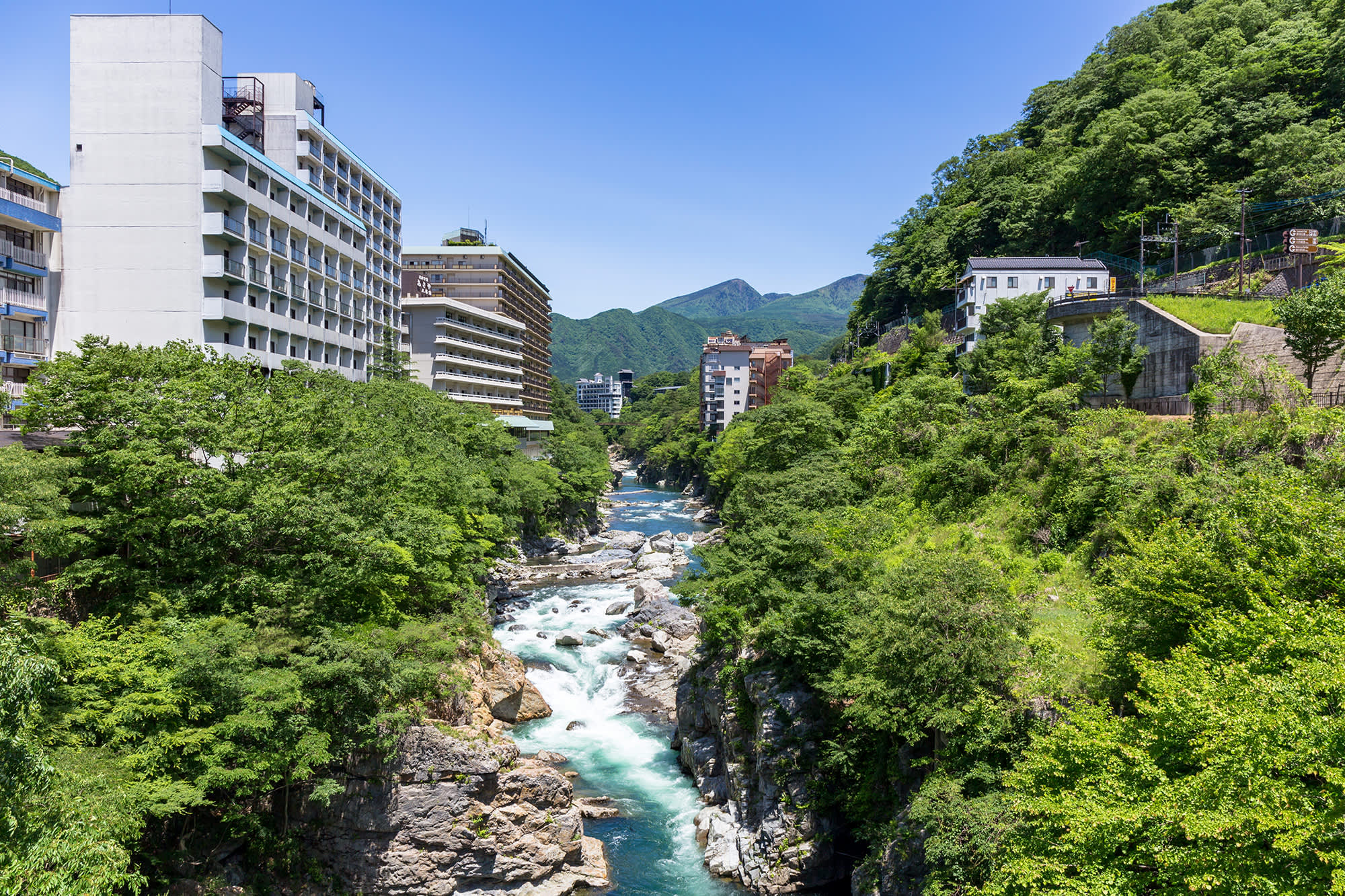 Kinugawa Onsen is actually made up of two hot springs—Taki Onsen on the west bank of the Kinugawa River, and Fujiwara Onsen on the east. It’s known for its relaxing properties and it attracts many travelers each year. Currently Kinugawa Onsen has over 80 hotels and ryokans, ranging from traditional Japanese style to modern Western style. 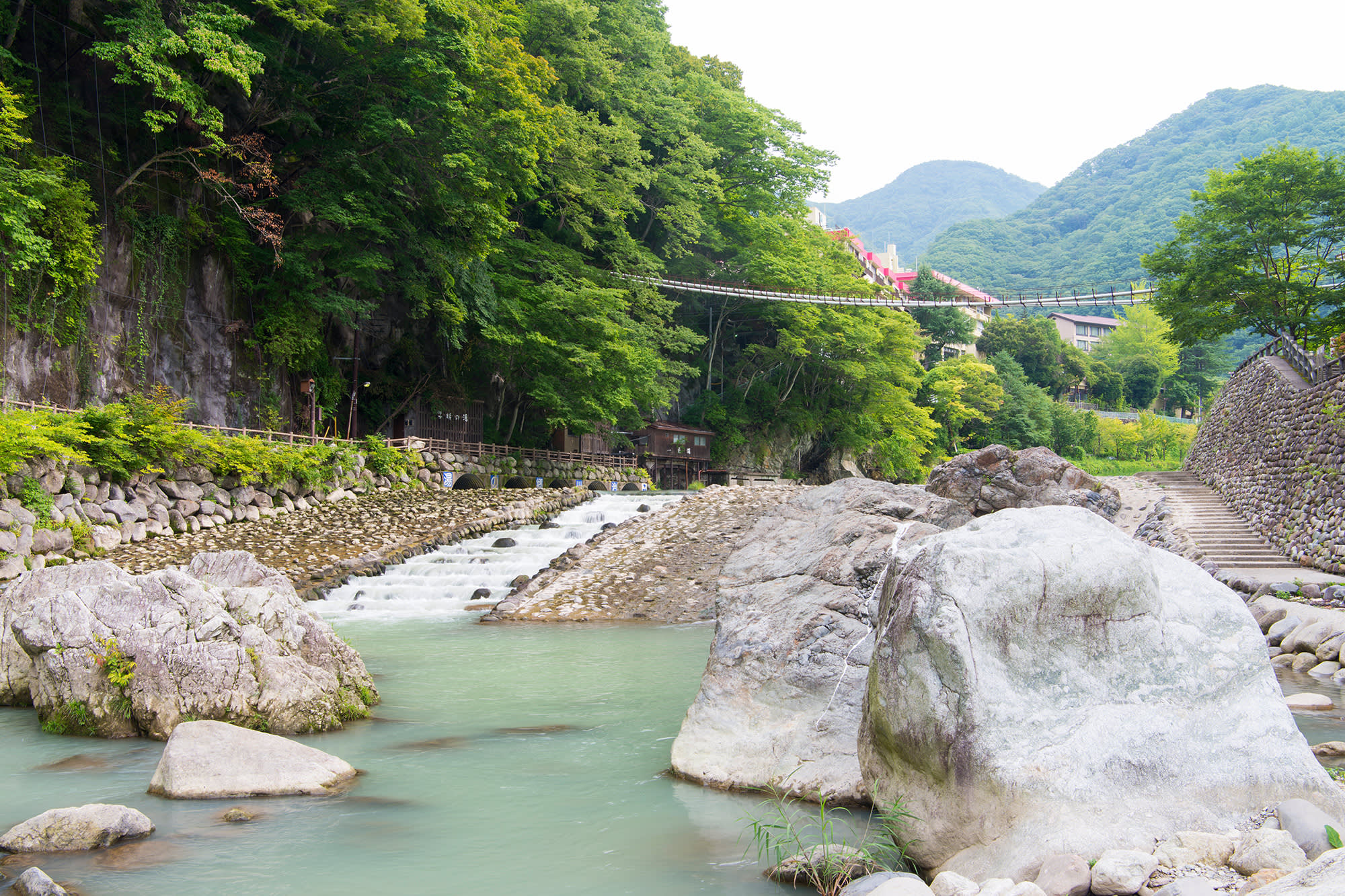 About 11 kilometers upstream from Kinugawa Onsen is Kawaji Onsen, first discovered in the Edo period and said to help wounds heal. The resort lies where the Kinugawa and Ojikagawa rivers meet, and has about 10 hotels and ryokan. You can also buy the Yumeguri Yuko Tegata here, a ticket that gives you access to several of the baths in the area. Because of the quiet, mountainous location, visitors at Kawaji Onsen can immerse themselves in the open-air baths on the river bank, taking in the rustic beauty of the area in each season. 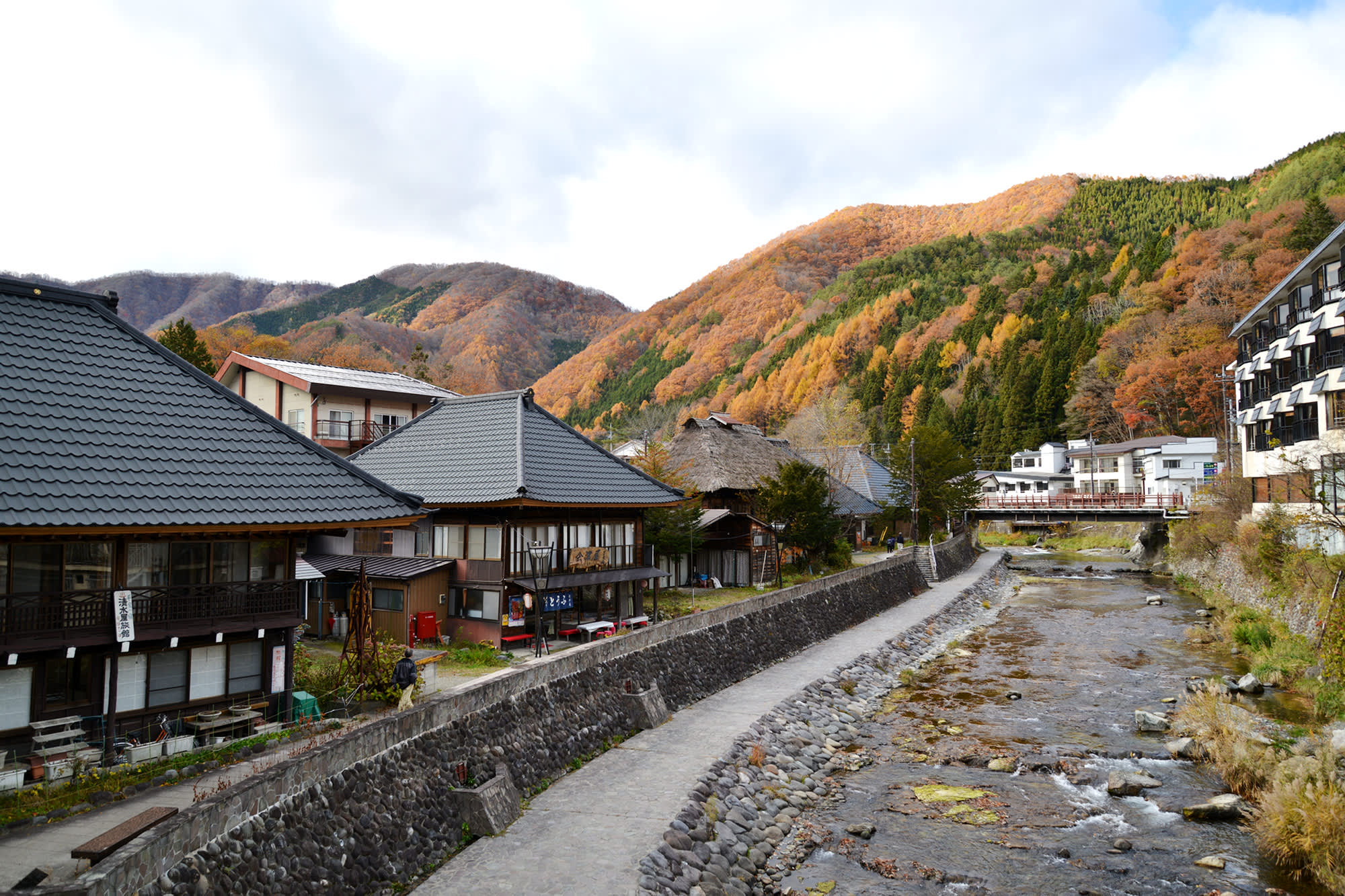 Following their defeat in the Genpei War (1180-1185), fleeing Heike (or Taira) warriors stopped here when they discovered an abundant hot spring on the riverbank. The mineral-rich waters helped to heal the warriors’ injuries, and they decided to settle by the spring, establishing Yunishigawa Onsen. Today, along with the resort’s soothing springs and magnificent nature, visitors can enjoy irori ryori (hearth cuisine) in which dishes are cooked over a traditional Japanese sunken hearth. 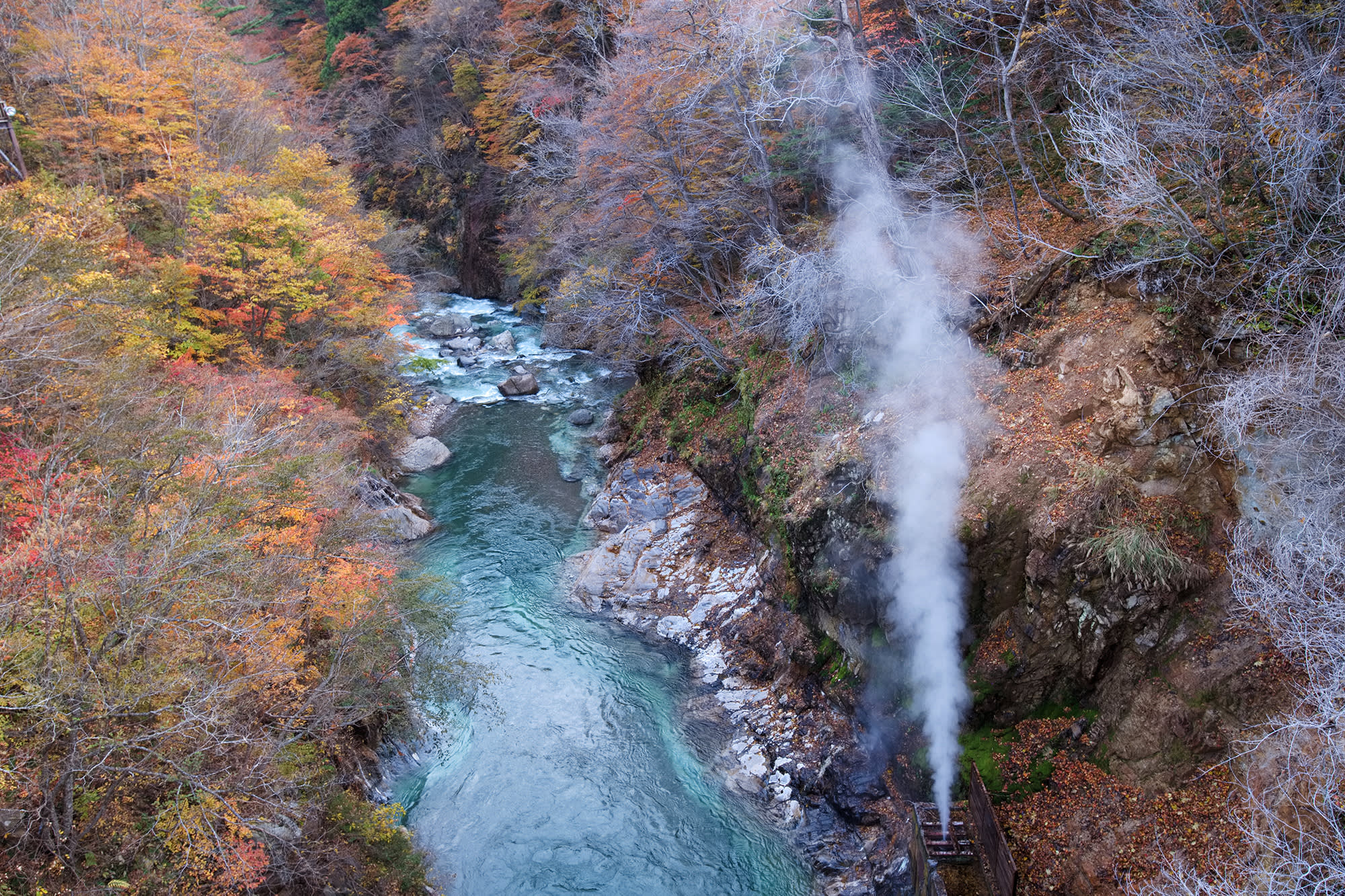 After passing the spectacular Setoaikyo Canyon and the south edge of Lake Kawamata, you will arrive at Kawamata Onsen. In addition to steam rising from the hot water, you’ll see a dramatic geyser or two alongside the river. The hotels and ryokans of this hot spring resort are dotted along the valley and lakeside, and have relaxing open-air baths from which you can enjoy the dramatic lake and mountain scenery. 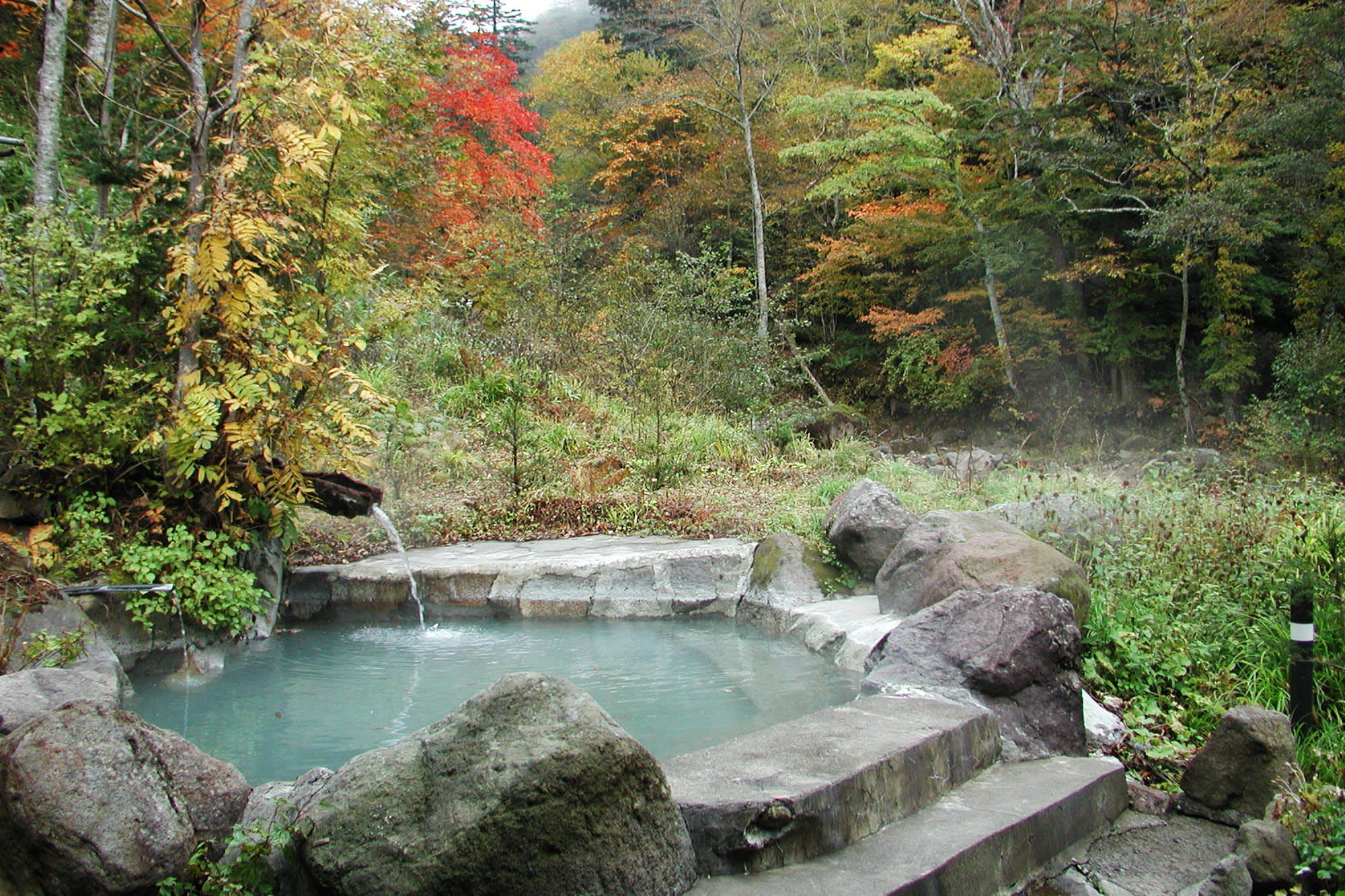 Okuniku Onsen is one of the hardest hot spring resorts to visit in the area. Cars are forbidden here, so it’s only accessible by ryokan shuttle bus or a 90-minute walk on a mountain road. Those travelers who take the time to visit are rewarded with abundant hot springs, unspoiled nature and complete seclusion—and in winter, the great pleasure of yukimiburo (bathing while taking in a snowy scene). 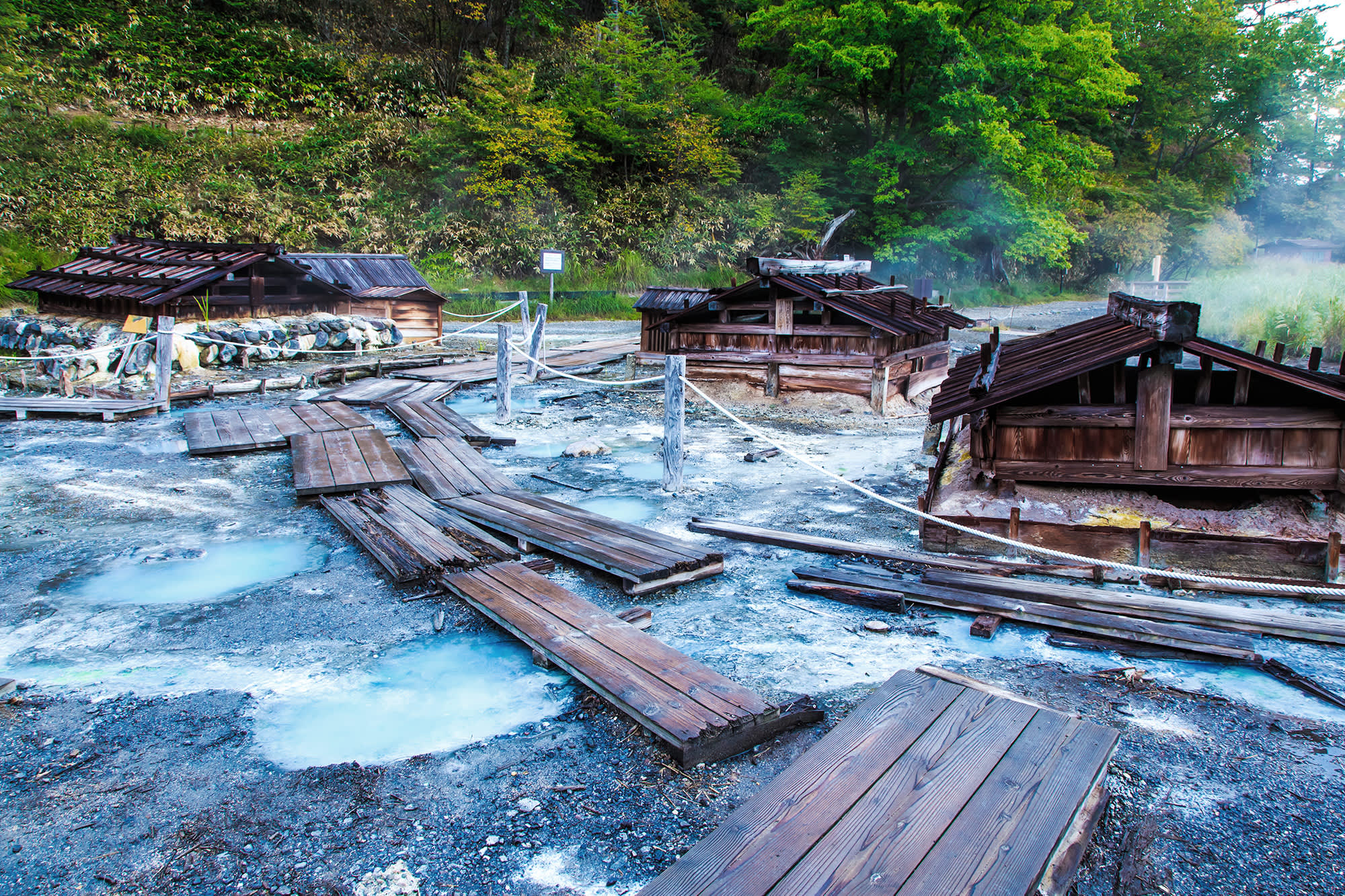 In the center of Nikko National Park, on a plateau surrounded by protected wetlands is Nikko Yumoto Onsen. It is said that the Buddhist monk Shodo discovered this spring near Lake Yunoko 1,200 years ago, and that Kobo Daishi also bathed here. At its source the water is a bright emerald green, but when exposed to the air it turns milk white; it contains a high percentage of metasilicic acid, which is thought to have a smoothing effect on the skin. 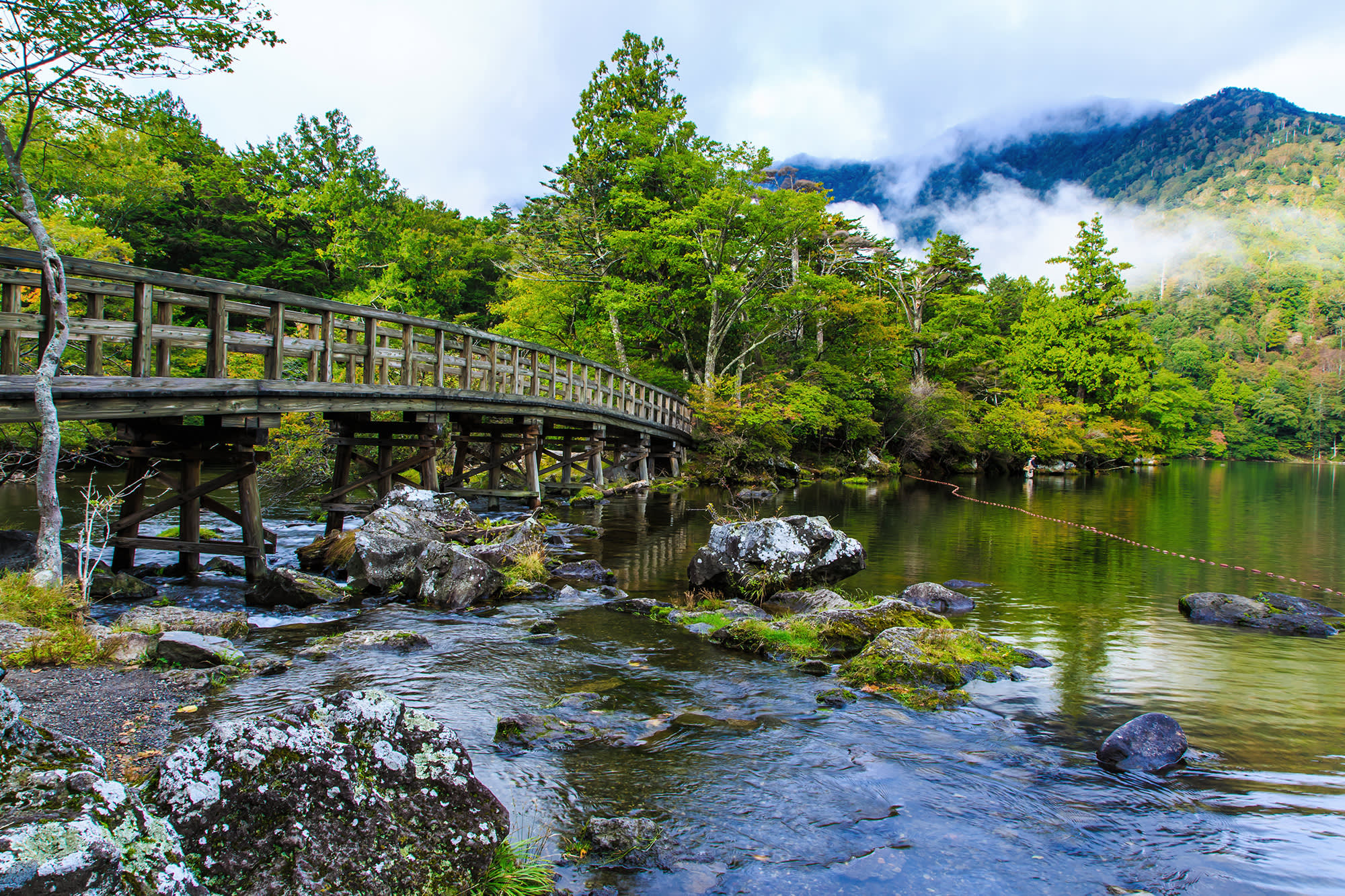 Near the World Heritage temples and shrines of Nikko is a legendary hot spring, allegedly discovered by Kobo Daishi (founder of Shingon Buddhism). Though the location of Kobo Daishi’s Muso-no-yu (hot spring of imagination) was not known for a long time, it’s thought to have been rediscovered in 1985, and is now simply called Nikko Onsen. Its clear, pure water is said to be good for the skin, and is a perfect treatment for the aches brought on by walking around all of the city’s World Heritage sites. 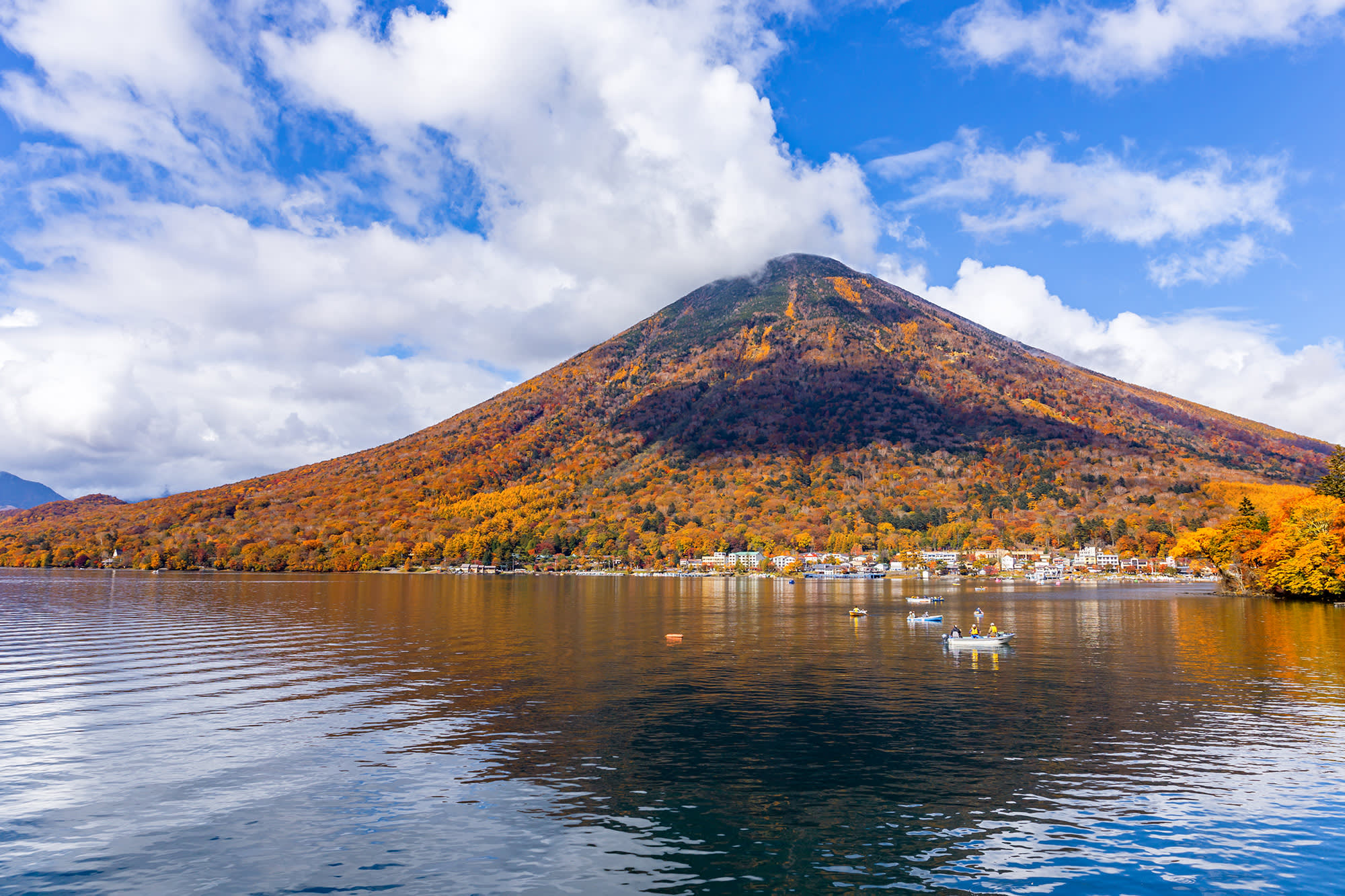 Chuzenji Onsen, located at the north end of Lake Chuzenji, is drawn from Nikko Yumoto Onsen, 12 kilometers away. Over that distance, the water—originally 78 degrees Celsius—gradually cools down to the perfect temperature for bathing.

Visitors can also enjoy sightseeing spots near the resort such as Chugushi (a sub-shrine of Futarasan-jinja Shrine) and Kegon Falls, whose scenery changes dramatically as the seasons pass. 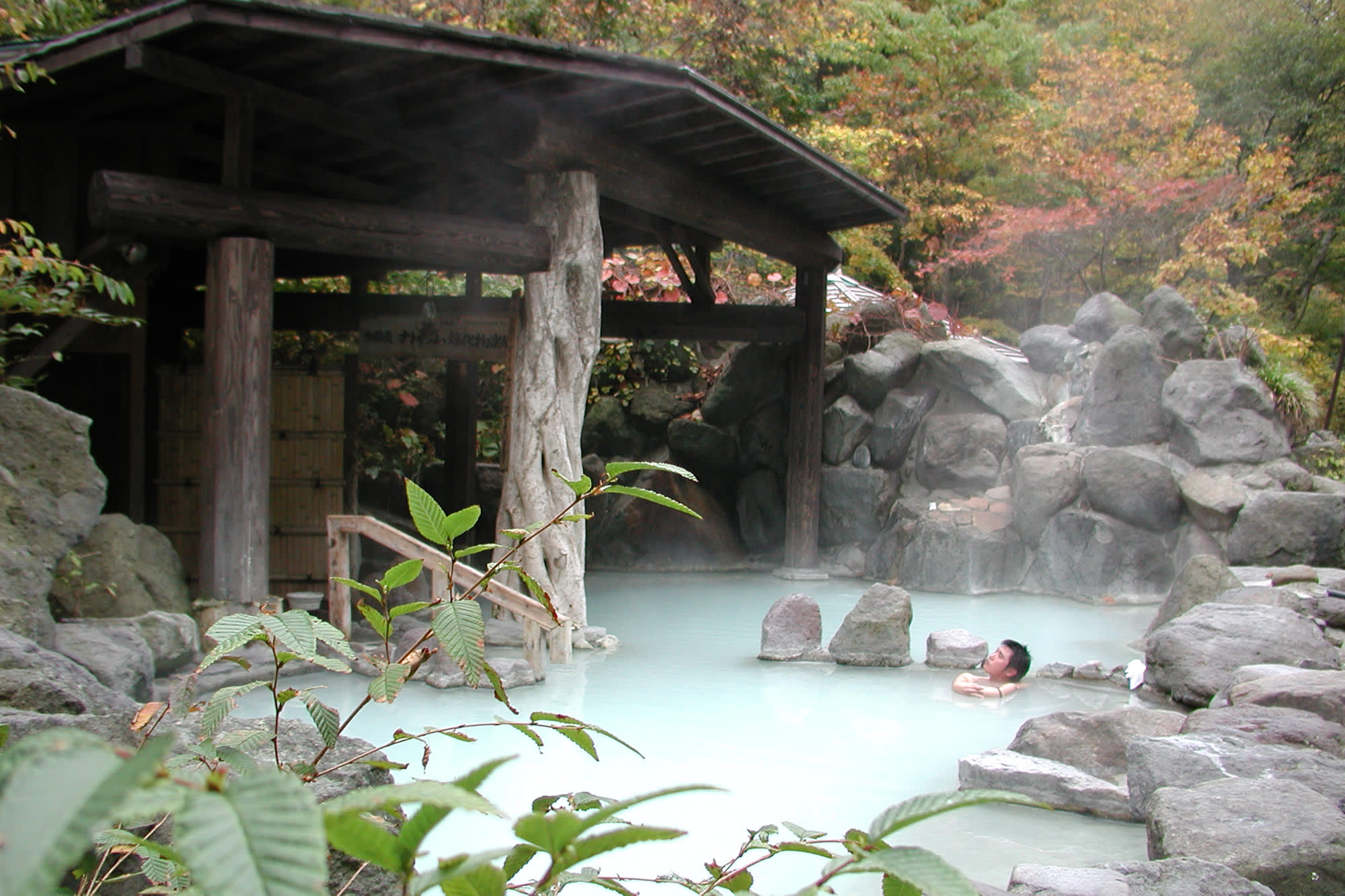 In order to make the most of your visit to a Japanese hot spring, you’ll need to learn the basics of bathing etiquette. Following these steps will ensure not only your comfort, but the comfort of your fellow bathers. Remember that hot springs in Japan are mostly gender-segregated baths where visitors must bathe naked, although rare exceptions exist. Many onsen ban tattoos so it's best to check each bath's policy ahead of time. It’s vital that your wash yourself thoroughly before entering the pools; there will be an area on your way in where you can sit and shower, either with a showerhead or taps and a small bucket. This not only cleans your skin, but if you start by pouring hot water over the areas farthest from your heart, it also accustoms your body to the temperature. Once you've finished washing, put the stool and bucket back in place, and leave the area clean and tidy for the next person. Just as you clean your body before entering the pools, you must keep the water clean after you’ve entered, so make sure to keep your towel out of the bathtub. You should also avoid swimming, diving or splashing in the water, which disrupts other people’s experience and can even be dangerous. You should also never take photos in the bathing area at an onsen. Keep the memories in your heart, but not on your camera! After enjoying the hot spring baths, dry off with your towel before entering the changing room again. The heat of the water may have dehydrated you a little, so be sure to drink lots of water afterwards. 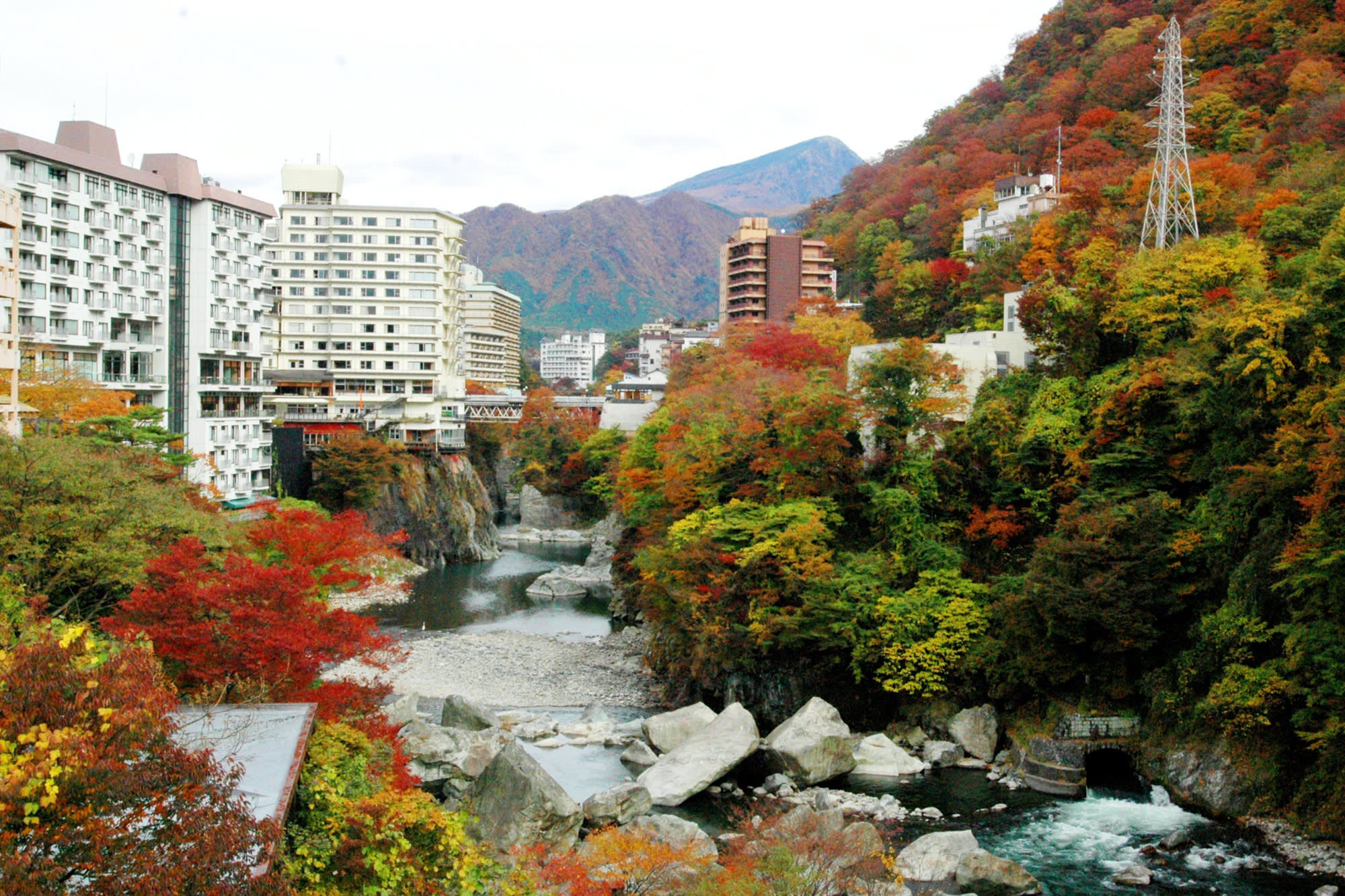 Of course if you’re staying at a hot spring resort you can use their baths, but you can also visit many others on a day trip. Generally tickets will include towels, so you can easily include a trip to the onsen in your day. Kawaji Hot Spring Resort even sells a Yumeguri Yuko Tegata (hot spring tour passport), which allows you to visit several onsen with the same ticket. 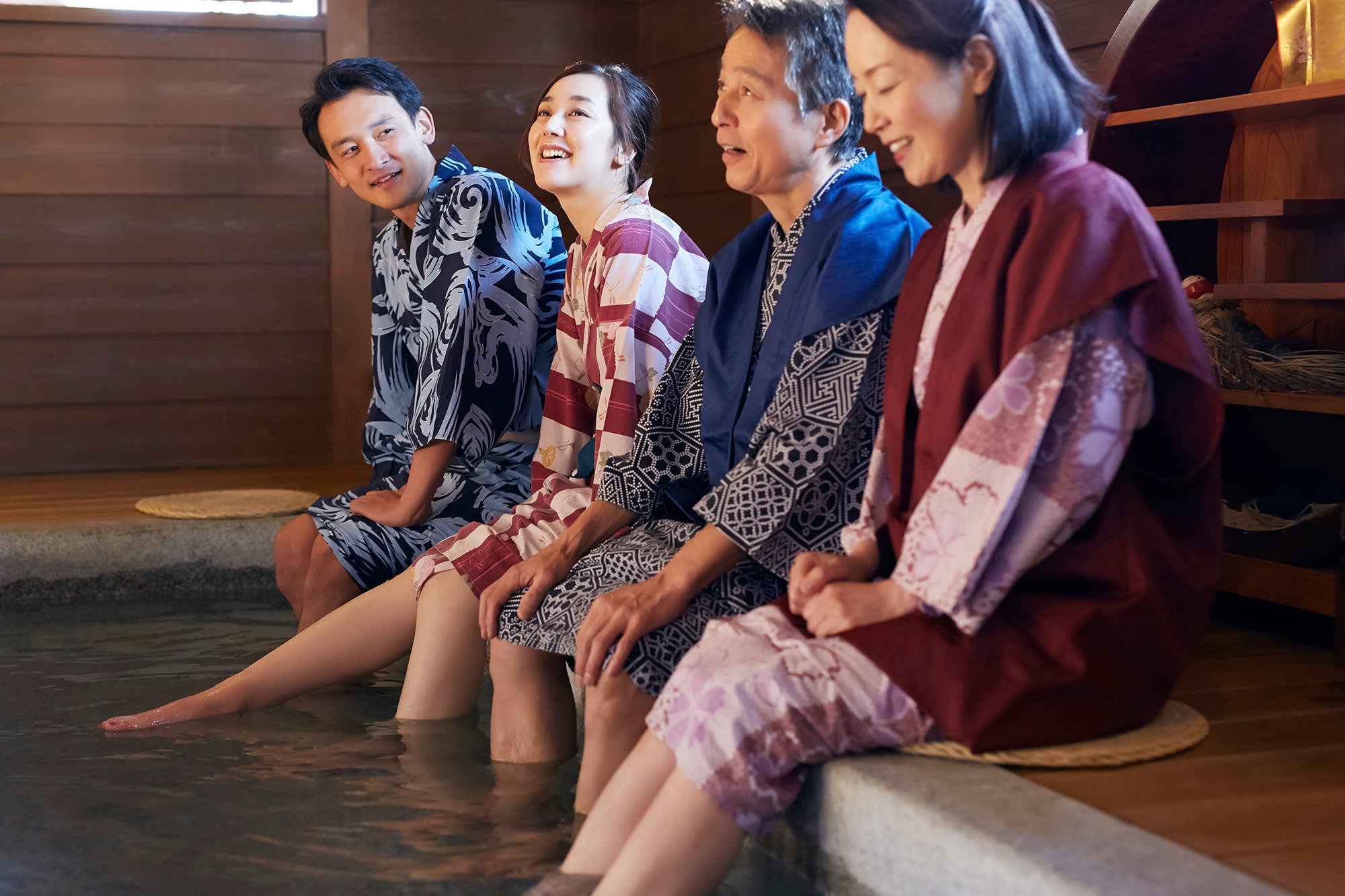 What is a Footbath?

Footbaths are perfect when your feet and legs are tired after walking around town. These tubs are usually outdoors near stations or parks, and have benches alongside them so travelers can take a seat, remove their shoes and socks, and rest their feet in soothing water.

Some even have smaller tubs where you can soak your hands, too.

The Best of Nikko's Hot Springs